Bluegrass Licks and How to Use Them: Creating guitar breaks on vocal tunes

Every song has a melody, a tune you could hum or whistle, and someone would recognize it even if the words were gone. Most people start out learning how to play guitar breaks based around the melody of the song. This is a great place to start, and often, a melody-based solo is the most professional thing you can play.

However, when I listen to bluegrass music, I hear guitar players blazing through solos of seemingly endless runs, sometimes barely flirting with the melody of the song. Whether improvised, or planned in advance, these solos somehow fit the song, even if they don’t sound like the song. Why is that?

“Do you think we can we take down this wall?”

I’m sure you’ve seen one of those home remodeling shows, where they take an old house, knock down a few walls, and transform a home with small rooms into an open-concept floor plan.  You know how this works—they bring in an engineer to say whether or not the roof will cave in if they take the wall out, and they put in a large wooden beam in its place to carry the weight that wall used to hold up.

It’s not just that they took something out; they had to put something back in to do the same job. This is the way it is with bluegrass licks. Yes, we are taking out the melody to create a more interesting solo, but structurally, we have to hang on to something, or our guitar break will sound like a random collection of scales and notes.

“But wait,” I can hear you say, “if you don’t play something that sounds like the song, how will anyone know what song you are playing?” This is a great question—here are a couple reasons I think this approach can work:

First, someone is presumably singing the song. A typical bluegrass song has 2-4 verses, with a chorus that follows every verse. For the 15-30 seconds of your guitar solo, are they really going to forget what song you are playing?

Second, you don’t have to use licks exclusively. They can be added as a matter of taste. You might want to play a solo based mostly on the melody, but punch it up with a few hot licks here and there. On a side-note, if you kick-off the song (bluegrass terminology for the solo that starts the song), you will probably want to base your solo largely on the melody. It’s important for people to be able to tell what song you are playing in the kick-off.

There is a whole spectrum of bluegrass musicians and fans, from staunchly traditional (that’s not the way Doc Watson played it!) to wildly experimental (Blackberry Blossom would sound a lot better with a B7b9 chord, don’t you think?).

Let’s take a look at a sample bluegrass guitar break. We will start by learning the melody and chords, and then add licks that go along with the chord progression.

Ex. 1 is “Your Love is Like a Flower,” a classic Flatt and Scruggs song that you might hear at a bluegrass jam session. 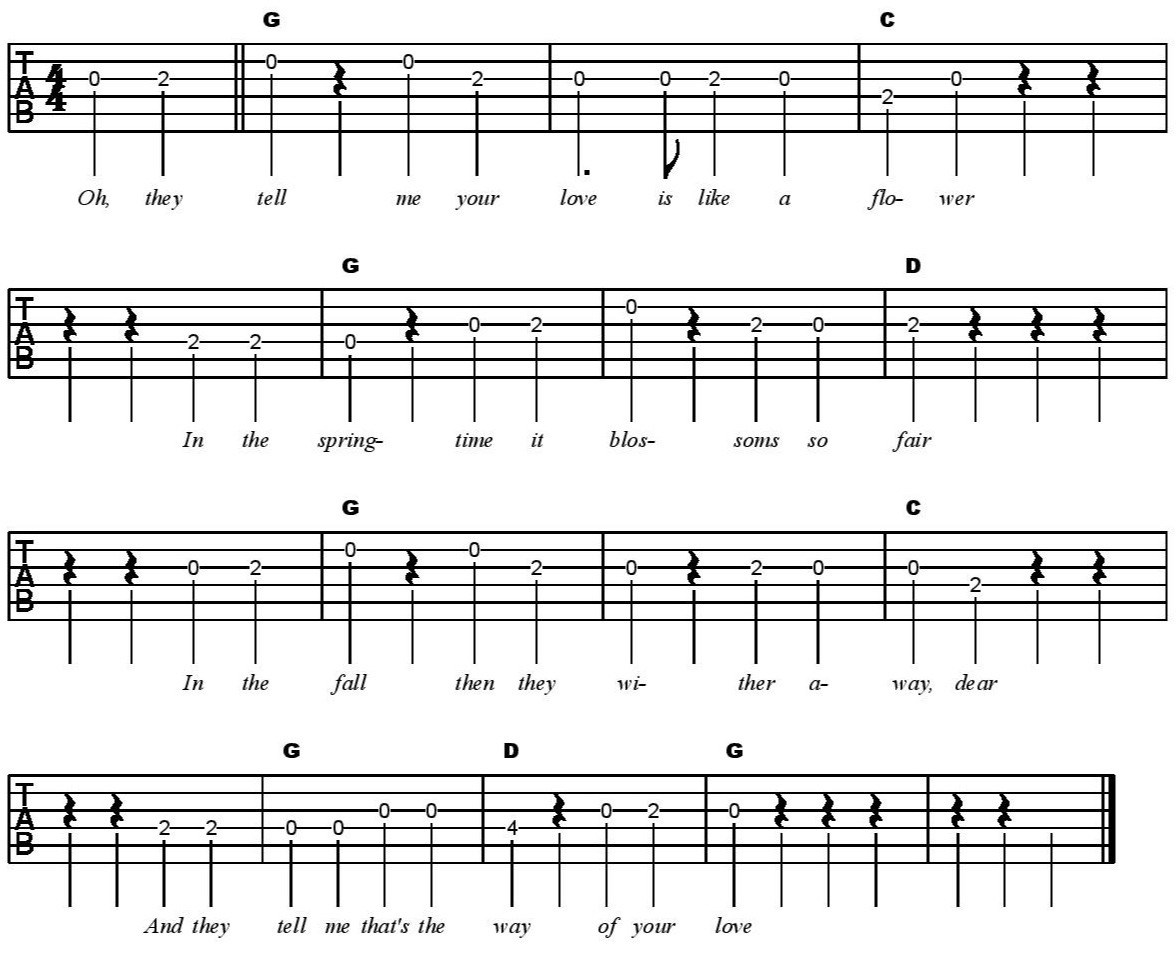 “Oh they tell me your love is like a flower…”

Notice the “pick-up notes” at the beginning of the example, and just before the C chord. Pick-up notes are two or three notes from the scale that lead in to the first note of the lick.

Using the chord progression is Ex. 1 as our guide, we can find licks for the next four measures of our break, shown in Ex. 3.

Ex. 3: “In the springtime it blossoms so fair…”

Again, you’ll notice the pickup notes that start the line. These belong musically to the following phrase, even though they appear in the previous measure.

Using the same idea, the next four-measure phrase could be this, shown in Ex. 4.

The final four-bar phrase of our guitar break covers the chords, G, D, and G.  This is a common phrase at the end of bluegrass vocal songs. Ex. 5 shows a 4 measure lick that can be used over this chord progression.

And there we have it! A fully-formed bluegrass guitar solo, following the chord progression with licks. Ex. 6 shows the finished solo.

Ex. 6: Bluegrass Guitar Break — “Your Love is Like a Flower” 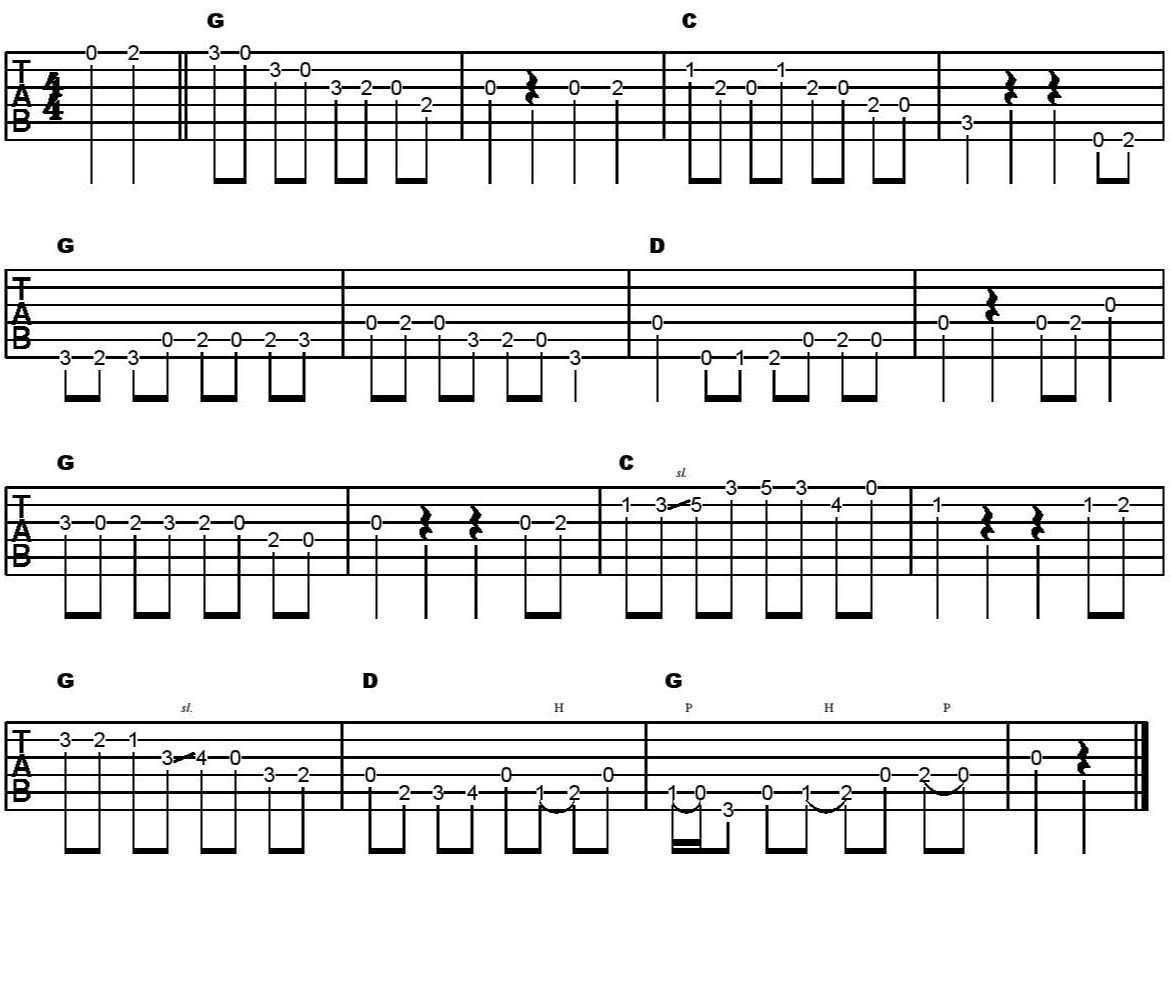 All the licks in this example come from the bluegrass guitar modules on Music Muse. Check out the modules on the website, practice a few until they become second nature, and try creating a bluegrass guitar solo of your own on another bluegrass song. Most importantly, have fun, and keep picking!